I can’t get the image out of my head. It’s messing me up, threatens to ruin my hike. As if that matters, under the circumstances.

The Carr fire has again doubled in size overnight, engulfing 89,000 acres. Several hundred homes have burned; a dozen people have died or are missing and nearly a hundred thousand have fled the town of Redding and nearby communities.

The worst is the story I hear at Bob’s Ranch House diner in Etna this morning. A grandfather and grandmother were taking care of their grandkids for the weekend. Gramps goes to run an errand and soon receives a call from one of the children. The fire has suddenly burst all bounds. Flames are advancing on the house. Grandma doesn’t know what to do. Can he come home, fast?

I feel so heart-sickened that I choke up and can scarcely eat my breakfast. Up top, the smoke we hikers walk through, or if lucky merely look down upon in the valleys, is not merely forest burning, bad as that may be. It’s also the hopes and dreams and lives of many people. For me, going back to the mountains today is impossible. It confirms a decision I was considering yesterday, along with other hikers: to jump north to Oregon, or beyond, wherever the air is clear.

My swing through the Big Bend has gone well until now. From the trailhead at tiny Castella, a one-shop hamlet just southwest of Dunsmuir at mile 1499, the trail rises several thousand feet into beautiful Castle Crags, then the next day gains another thousand feet across talus-covered slopes full of flying grasshoppers (sounding deceptively like rattlesnakes) into the Trinity Alps.

In the morning, these legendary mountains are swathed in smoke. The famed views of Mount Shasta to the east are lost in a white murk beyond a ridgeline or two. It’s a bit like wandering through watery vistas of milk.

At first, I expect it to be like this all the way to Oregon, since there are major fires to both the north and south. But then around 6600 feet, just below the tree-line, a northwest wind begins to clear the skies and the upper reaches of distant peaks suddenly appear above the lower-lying haze choking the valleys.

This becomes a daily pattern. Each morning, as the Carr fire worsens, the smoke at lower elevations becomes notably heavier. Setting out on a stretch from Parker Creek Road at mile 1539, several days ago, my eyes begin burning and I don a nurse’s face mask, which I normally wear on my hands to protect them from the sun. But as the trail nears 7000 feet, and as the late morning winds pick up, the air clears. To the south and east, a heavy band of murk butts up against the mountains, with Mount Shasta and other peaks making only brief cameo appearances. But to the north, at high elevations, the skies are blue and pristine.

Deep into the Russian Wilderness, around mile 1585, I sit a spell with a pair of other hikers, Woodchuck and Gently Used. We look out at the sharp smog line below us to the southwest. Woodchuck, the older of the two, with a resplendent long white beard like Father Time, fears the Carr fire will grow so big that even here, around 7000 feet, there will be no escape from the smoke. If so, he says, he’ll just go somewhere else. “I’m old,” he says. “I adjust.” Besides, there are worse things. Like cancer. Over the winter, doctors removed the tip of one ear a slice of his lower lip. “Skin grafts suck,” he says in his soft mountain-man accent. “Feels like dead meat. Can’t drink my coffee without spilling.” 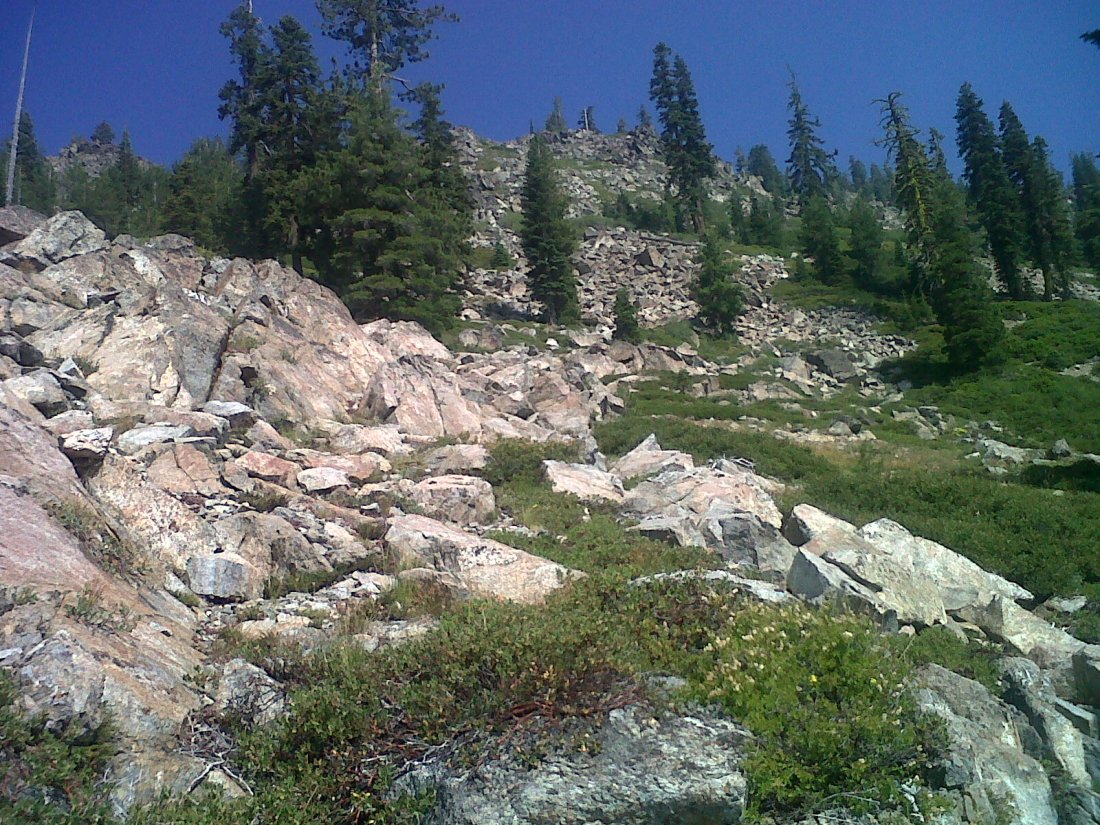 The Russian Wilderness is a day of sawtoothing — up a thousand feet, down again into a valley. Soft and fast trail through forest one moment, goatwalking along vertiginous rock cliffs the next. After one particularly hot and long climb, I look up at another ridge and think, “Wouldn’t it be nice if we didn’t have to climb that?” But the PCT offers no respite. Up and over she goes.

At Etna Summit, at mile 1599, a group of us hitch into little Etna, 10 miles to the east. The skies are clear. Fifty or so tents are pitched in the town park. And it’s a foodie’s heaven. The best place in town, the Denny Bar, distills its own gin and vodka and offers a menu and ambiance more typically found in Manhattan than a tiny hiker town in northern California.

I could easily have zeroed here. But alas. Overnight, the Carr fire again substantially worsens, and in Etna you cannot see clearly to the end of the block. Hiker posts from the mountains to the north are not much better.