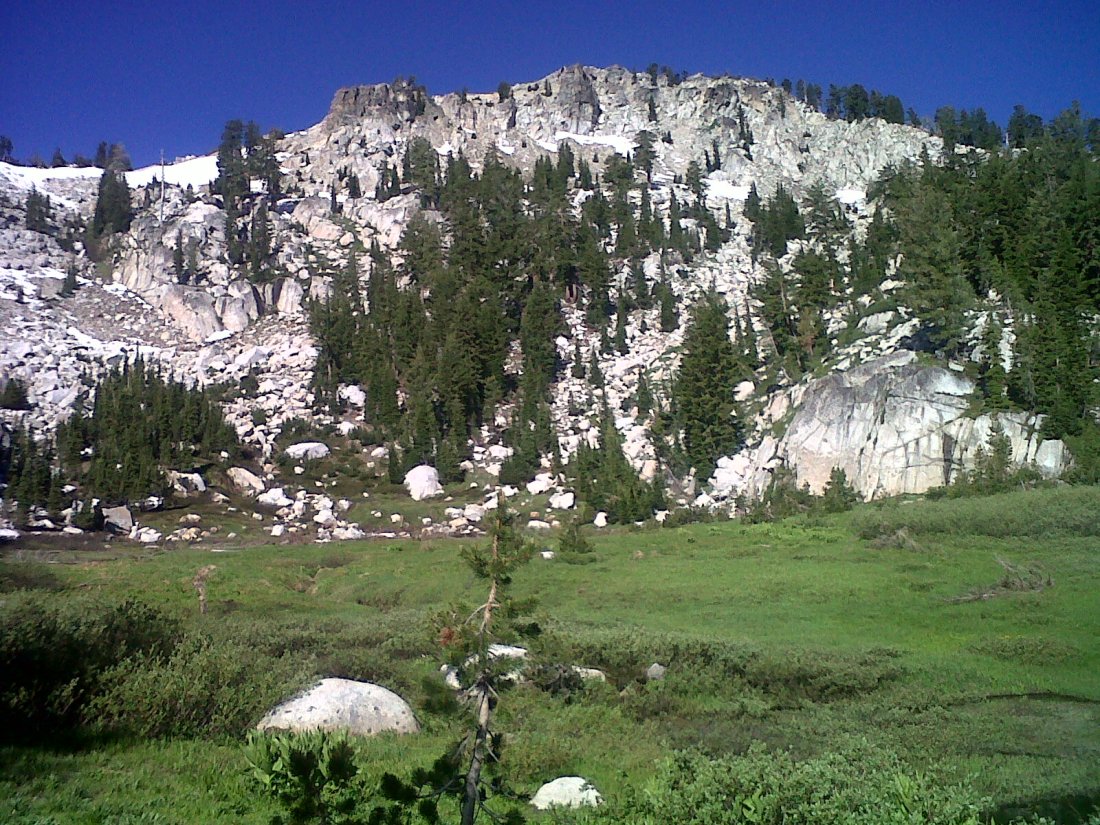 Power-hiking. Usually, we think of men putting in those mind-boggling 30 to 40-mile days. But surprise. Judging from what I’ve seen on the trail the past few days, it’s women all the way.

Leaving camp at Velma Lake, at mile 1110, the PCT runs soft and fast, more like flat, forested Oregon than the up-and-down Sierras. It’s a landscape of deep pine forest, ferns and marshes and meadows exploding with blue and yellow flowers. To the west, the granite-faced ridges of Desolation Wilderness taper off and lose their snow, becoming more hills than mountains. “A moving sidewalk,” I say to myself. “I’m really gonna book it!”

Just then, a pair of younger hikers blast past in a clatter of hiking poles. Both women. As they pass with a cheery “Good morning,” one catches a root and falls in what she laughingly calls a “face-plant” — her second on the trail, she tells me, bouncing up.

Actually, though, it isn’t. Instead of pitching face-first, she twists in mid-air and lands safely on her pack. We dub this remarkable feat of trail acrobatics the PCT half-twist. It should be an Olympic sport, like the diving competition, we joke. And with that they’re off again, aiming to put in 30+ miles before the day is done.

Richardson Lake, another of of those sparkling blue alpine redoubts, makes a great place for a break. I’m sitting on a weathered log, dangling my feet in the water and admiring the view, when there’s a commotion in the bushes and a stripped-down Amazon splashes into the water, free-styles like a Mississippi paddle-wheeler out to the middle of the lake, disappears in a deep under-water dive, then re-emerges in a white-water-churning swim back to shore. “Hi,” she says, squirming back into her hiking togs, donning her pack and heading down the trail, all this in a very few minutes. Where do they even make these people, I ask myself?

Struggling up a rather gentle ascent to Barker Pass, 15 miles into the day, I wonder whether to camp for the night or go on. My maps show a long, steep climb to a crest high above the tree line. It will be beautiful, I know, but because of the steep slopes to either side there will be no camping for another ten miles. And it’s hot. Hothothot. And I’m tired. So tiredtiredtired.

And again, just at this moment as earlier in the day, a trio of young women — in dresses, no less — blow by me. When I catch up at Barker Pass, they’ve got their lunches laid out on a picnic table and are busily planning the rest of the day. Their strategies are similar but tactics differ.

MacGyver, in a sort of calico dress, says the goal is to get within striking distance for an early morning arrival at Donner Pass, where family will pick her up for a zero in Reno. Already today they’ve come over Dick’s Pass, about 20 miles back. “That means,” I say, “that you’ll do another 15 or 20 this afternoon?” Yup, she nods, scarcely giving it a thought. Seeing that it’s 3 pm in the afternoon, I think, that’s scary impressive.

I do a bit of silent mental mansplaining. Should they really be sitting around this picnic table, chatting with the likes of me? They should set off right now, if they’re going to put in that kind of distance. I mean, like this red hot second!

Another of the trio, the one in a black dress, shakes her head at this. Her trail name, Stuck to the Ground, reveals her intentions. “I like to nap,” she explains, and that shady spot under the pines looks just too inviting. She’ll catch up with her friends after a snooze.

And so off I go, both inspired and daunted, slogging up from Barker Pass to the ridgeline at 8300 feet, through forests of giant pines, Lake Tahoe resplendent to the east, over a snow drift at the summit and along a treeless crest that contours the steep mountain hillsides for mile after glorious mile, the land falling away forever on either side, range upon range of mountains fading into the blue distance. In the slanting late afternoon sun, it is one of the most beautiful places have ever been.

Ten miles on, the trail at last drops to Five Lakes campground. I wearily shed my pack and hurriedly put up my tent before the mosquitoes eat me alive. The Pad Thai dehydrated meal I’ve been rehyrating in my peanut butter “cooking” jar has not, well, hydrated. But then, after 26 miles today, I am too tired to eat.

I think of the Amazons, as I’ve dubbed them, still speeding along. My 31-year-old son’s birthday is coming up in a few days, and I find myself wishing I could wrap one of them up and send her off as a possible future daughter-in-law.

Trust me. I know how weird this sounds, and maybe it’s a measure of my deep fatigue. But wow, talk about women power. Made in America.