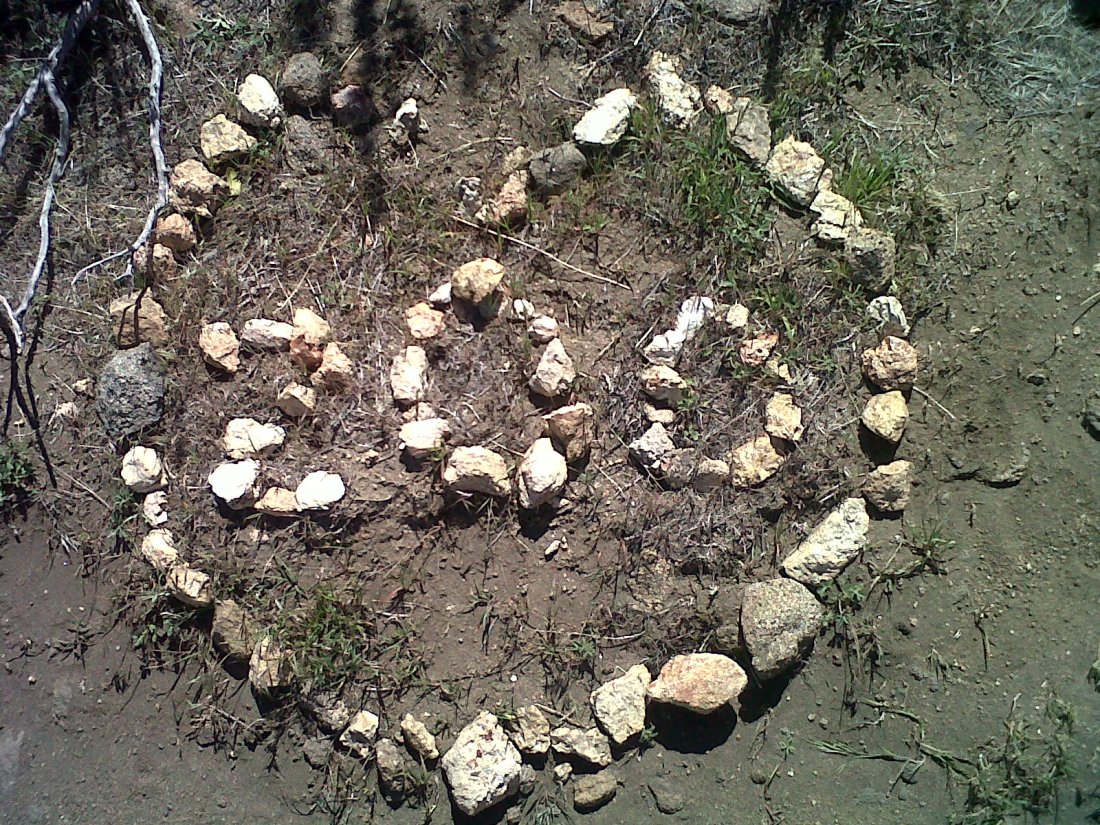 How did I see him? Perhaps some sixth sense prompted me to look closely at this particular small shrub overgrowing the trail. There, in its dark shadow, I see the arrow-shaped head with its slit eyes and nostrils.

My first rattler on the PCT, coiled and all but invisible, is poised at ankle-height just inches from where my next boot steps would fall. Where was the warning, the distinctive rattle? Only when I rolled a small rock into the shadow of the bush did it sound. A close call. Surely the snake would have struck had I taken another unwitting step or two.

You might think the 20 miles from Black Mountain Road to the Gorgonio Pass would be an easy walk. After all, it’s down, down, down — 7000 feet from the mountains around San Jacinto to the floor of the Mojave far below. But no. Seldom does anything come easy on the PCT.

Though not as strong as yesterday, the wind is blowing hard atop Black Mountain, tearing limbs from trees and cutting through every layer of clothing I have on. At the trailhead, a cache of water and oranges is frozen solid. At 9 am, temperatures are in the 20s despite the brilliant sun. Frost silvers the pines on the drive back up to the PCT, fresh snow powders the higher peaks and canyons.

A mile in, the alpine forests begin to break up. After three the desert reasserts its suzerainty. As the sun rises higher in the sky and the trail drops in elevation, the wind bites less bitterly and I shed my wind shell, then a layer of fleece and my woolly bad weather hat. Lizards and wildflowers reappear. By noon, the desert heat is back.

The steep descent took some engineering. Buttressed stone walls support the trail along seemingly endless switchbacks. Drifting in the heat, I trip on a stone and come close to catapulting down the rocky slope. Another close call. “Get your wits about you, Mike!” I say to myself.

I catch up with another hiker from the Paradise Café –- a 20ish bearded guy named Matt, now known as Diogenes for his penchant for philosophy. When mighty Alexander the Great first met Diogenes, says Matt, he asked the philosopher what he could do for him. Diogenes, lying in the sun, replied: “Well, you could stand a little out of my light.” Later in life, legend had Diogenes wandering the world carrying a lantern in search of that rarity, a wholly honest man. Matt suspects that’s an archetype for many on the PCT. “A lot of people come to the trail in search of something,” he says. “They may not know what, but they are seekers.”

It’s now 3:30 in the afternoon and still down, down, down, back and forth on the switchbacks. We pass a second milestone in white pebbles beside the trail. We’ve done 200 miles from Campo. I let out a whoop.

At last the trail bottoms out at Snow Canyon Road, with a water fountain surrounded by swarms of bees. A trio of Israelis are there who camped last night at Fuller Ridge, where I had caught a ride just half an hour before. The clouds rolled in, then an ice storm. They hid behind some boulders but the wind was still too strong to put up a tent or cook. Their water bottles froze “like a rock,” says one. They passed a miserable, scary night.

The long downhill ends in the soft, shifting sands of the Gorgonio Pass. It is the worst desert so far –- an ugly, featureless litter of scrub and stones and shifting, meandering tracks without apparent direction. After a time, I give up trying to follow the official trail and simply head for the dark underpass beneath Interstate 10 in the distance, where I know there will be a cache.

A small group of hikers huddles in the cool, sandy shade. One is a former military field doctor known as Medic, naturally enough, who’s been taking care of so many others that he himself has fallen weeks behind schedule. Among them is a tanned, wiry woman named Steel, who seems dangerously unprepared for the PCT, unable to carry her own food and water or hike more than five to eight miles a day. Medic’s sticking with her, part pack mule, part guide.

Medic is full of cheering news. He’s the one who tells me about the likely fate of the lost Irishman David Sullivan, at least as the forest service rangers see it. And just a few days ago the PCT claimed its first life –- an 89-year-old man who apparently died of a heart attack not far from Mount Laguna.

But wait, there’s more! A pack of feral pit bulls from the neighboring Indian reservation is said to be terrorizing the trail in these parts, Medic reports. See that village thataway? It’s full of hiker-hating hostiles. And beware: no sleeping under Interstate 10. State troopers might arrive at any moment and pepper-spray vagrant PCT hiker trash who flout the rules.

One thought on “The Rattle Snake That Didn’t Bite And Other Dangers, Real or Imagined”