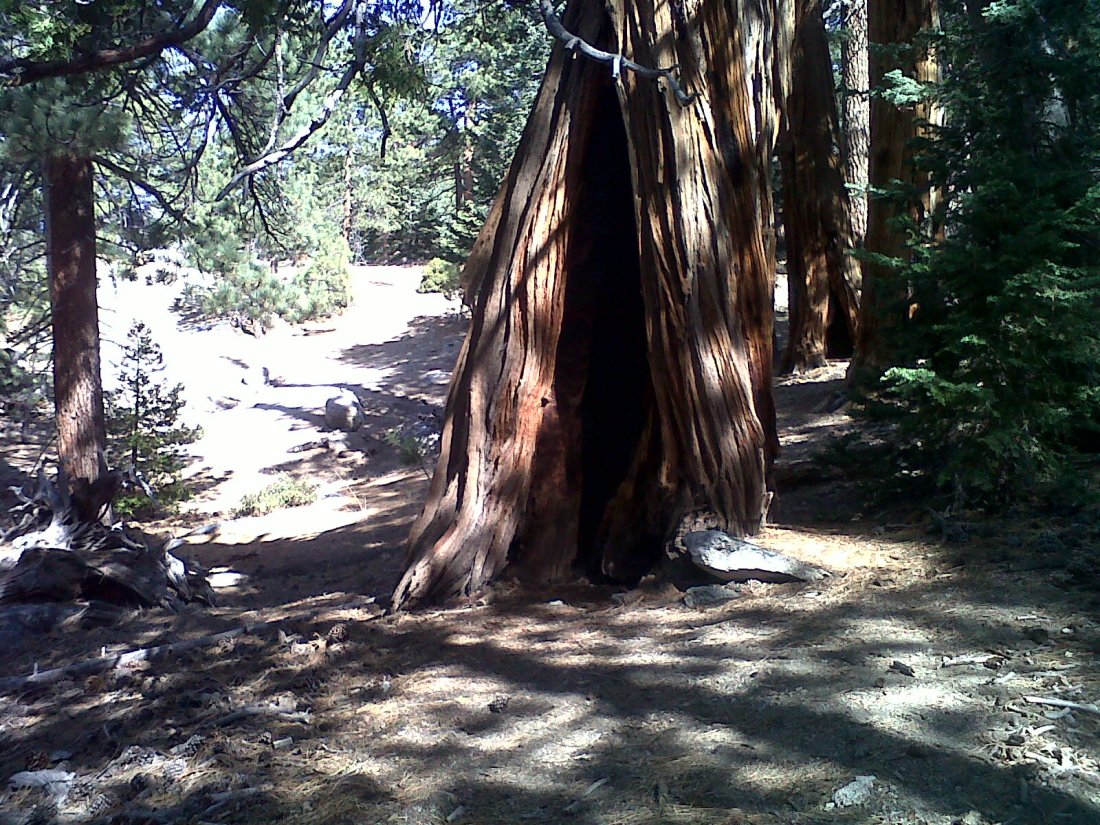 Could I be getting strong, or at least stronger? The Deer Springs trail rises 3600 feet to the PCT in a single swoop –- up, up, up into an alpine Eden just over 9000 feet. It is a world of giant wind-sculpted boulders balanced precariously atop others, surrounded by massive pines four or five feet in diameter, some hollowed out by fire with “caves” large enough for a (small) person to shelter in.

Just after the Marion Mountain trail junction, I come across a few lingering patches of snow. Usually this time of year hikers must wear microspikes to keep their footing. I’ve been worried, for in a mere half mile comes the infamous, and infinitely treacherous, Fuller Ridge, a knife-edge passage of vertiginous drops and slippery footholds that would challenge a mountain goat, let alone me.

Down in the valley, I saw photos of a young Irishman, David Sullivan, who disappeared last season between here and Big Bear, some 70 miles ahead. But Idyllwild rangers are sure he’s here, somewhere along Fuller Ridge. Canine trackers traced him to the beginning of the ridge and found no scent on the northern far side. “He’s there,” one recently told another hiker “Most likely he slipped and fell down one of the chutes, or possibly into a crevasse.”

Fuller Ridge is a hellish gauntlet of steep ravines and sometimes vertical drops where a false step would catapult you head over heels into oblivion. It’s sporty enough in good conditions. On ice and snow, with or without microspikes or crampons, Fuller Ridge is blood-chilling. Rangers hope to find the Irishman’s body this summer. 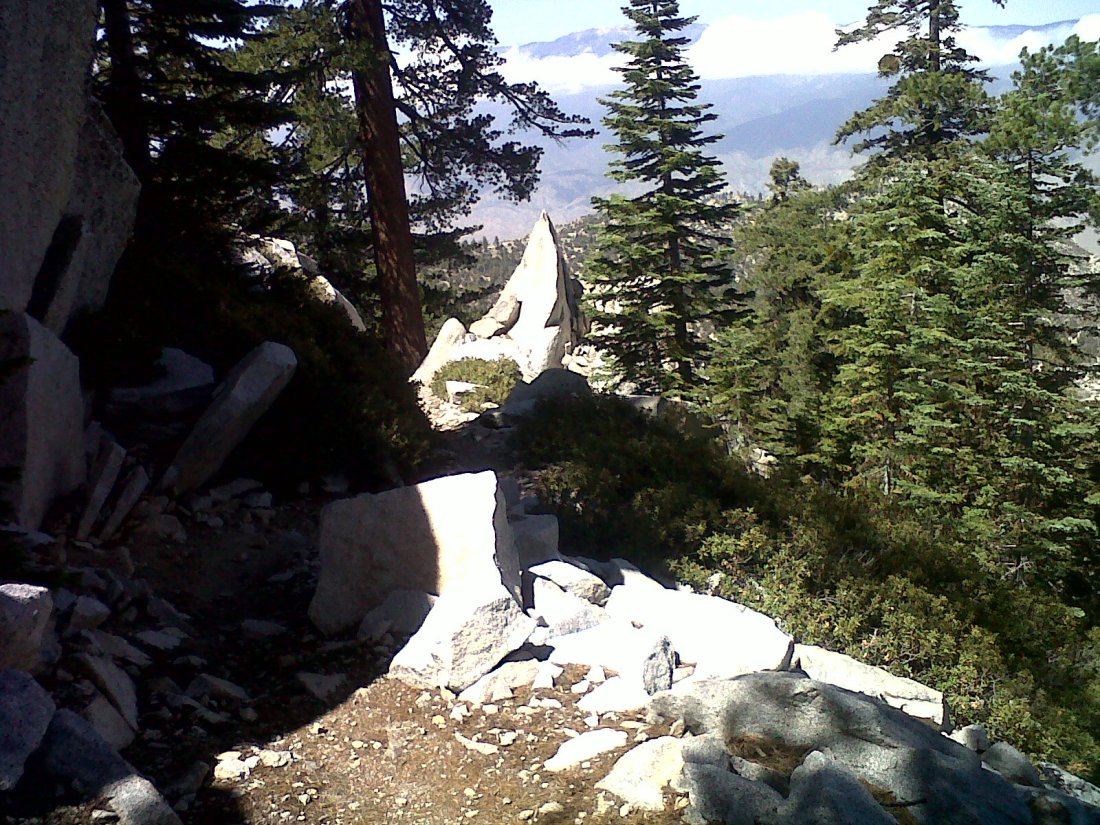 A cold wind cuts through the trees. There’s snow on the higher mountains in the rugged distance. By a tumbling stream I come across what I take to be a father-son duo filling their water bottles, the first northbounders I’ve seen today. They stayed in a cabin at high elevation last night, with temperatures below freezing. They are still bundled up in their puffies, fleeces and rain gear for warmth. I’m in shorts and T-shirt plus a long-sleeved base layer.

Today’s forecast is for high winds, despite the brilliant sun, and for once the weathermen are right. As I begin the Fuller Ridge crossing – five miles from south to north – a genuinely howling winds begins to blast through the tree tops. What will it be like on the exposed stretches? I imagine myself crawling along on hands and knees, holding onto to rocks and roots as the wind tries to hurl me off the mountain.

At the first open saddle, I estimate the gusts at 60-70 mph. The trail drops onto the protected east flank, at last, and there’s Waltzing Matilda, who I last saw in Warner Springs, kicking back in a sheltered cove of rocks. The sun shines invitingly and I join him. Sixty-ish and retired, with white hair and beard, he lives on a sailboat in San Diego and looks like a distinguished ex-diplomat. Far below to the northeast is the desert to which we’ll descend tomorrow. It is a vista of wind farms and hot blowing dust, in utter contrast to this cool alpine island. 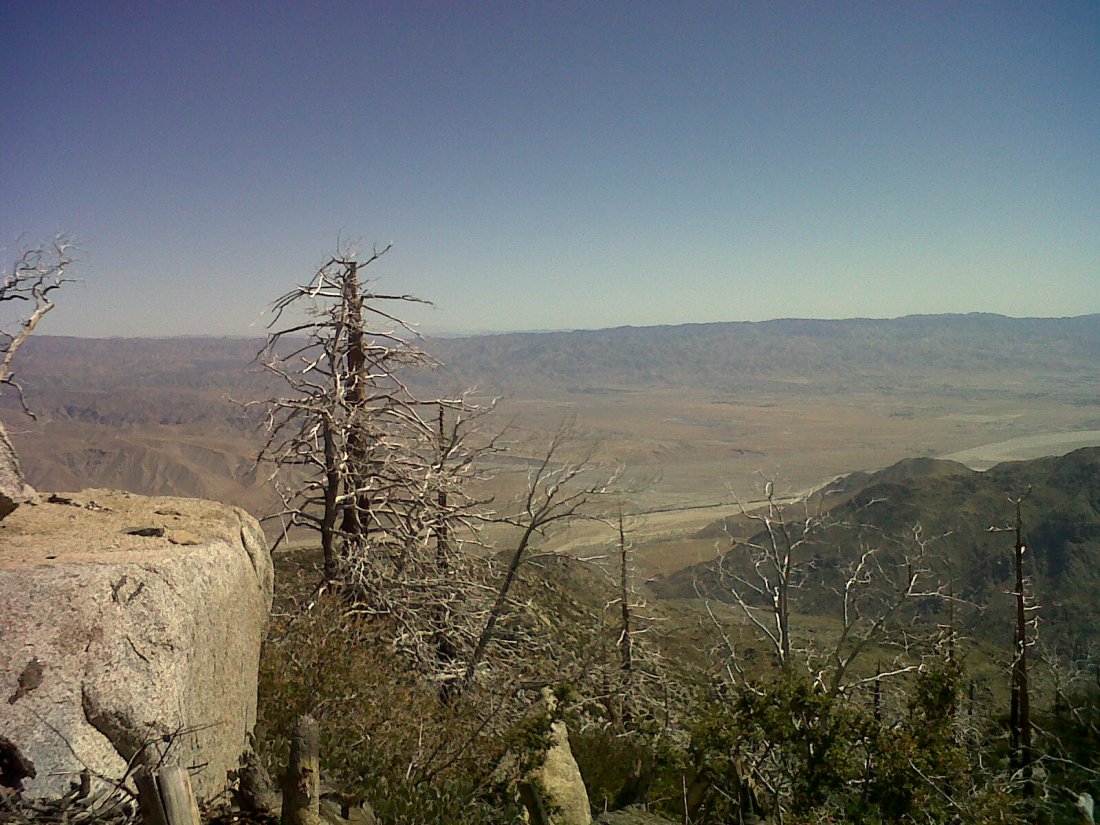 After a time trail returns to the exposed western side of Fuller Ridge and the wind hits like a physical blow. There’s no snow, however, and with the sun it’s more exhilarating than scary. It nonetheless takes me two hours. By the time I emerge at the far trailhead on the seldom-used Black Mountain Road, dark clouds have begun rolling in. The temperature suddenly drops ten to fifteen degrees. At 1 pm, in the heat of the day, I can see my breath.

As I struggle to get on leggings and a few extra layers for warmth, I hear a growling, churning from below the trailhead campsite.  A yellow jeep comes grinding up the road — one of only two cars to pass all day, it turns out. I jump up and wave my arms. “Hey! Wait!”

One guy turns to the other and says, “you hear something?”

“Naw. It’s just the wind,” says the other.” But they turn in just to be sure and find me, already shivering and turning blue.

“Sure, we can take you down to Idyllwild,” says the guy behind the wheel as I gratefully jump into the back, relieved beyond words to so luckily escape what was looking to become a very cold and possibly dangerous stint on aptly named Black Mountain.

As we bounce down the rutted and rocky road, Mike the driver tells another tale of death in these parts. Not long ago, a young couple took the gondola up from Palm Springs for a little day hike. Hearing the sound of falling water, off the trail, they set out to find it, thinking it would make a pretty photo. Soon they were lost.

After a frigid overnight, they decided to follow the downward lay of the land, assuming it would eventually dump them into the desert. The canyon they chose, however, ended at a sheer cliff. As they pondered what to do, they came across a tent and camping gear. Rejoicing at the prospect of imminent rescue, they waited for the owner to return. To pass the time, they leafed through the journal they found inside his tent. To their horror, the last entry was dated almost exactly a year ago.

The camper, it turned out, was also lost – and had despaired to escaping. They spent the night in the tent and, the next morning, found his body by a dry creek-bed. After another cold night, the couple hit upon an ingenious  solution. Using the camper’s matches, the man started a fire under the pines, hoping to spark a forest fire that would attract help. “Better go to jail for burning down a forest than die up here,” says Mike. Miraculously, the gambit worked. There was no forest fire, but a forest service helicopter flew over to investigate the smoke – and spotted the lost couple.

Bad weather (such as was blowing in just now) would have changed all that, says Mike. “They would have been goners for sure.”

Crossing the main square back in Idyllwild, I run into my 18-year-old friend from Day One. I’m still shivering from the open-air jeep ride down Black Mountain; John is in shorts and funky shirt bought for $1-a-bag from the local Goodwill while his own gear gets laundered. “I’m going for an ’80s look,” he says, then regales me with tales of the warm showers he and his hiking posse is enjoying. “The water ran dark for 20 minutes,” he assures me.

Ah, civilization. So far from that forbidding mountain.

One thought on “Death on Fuller Ridge”